I had little idea when I wrote in my last post about hurricanes that my decision-making would be tested so soon. And yet here we are, as always, closely following every bit of news we can get on Hurricane Dorian. The National Hurricane Center advisories come out every six hours, at 5 and 11 AM and PM, EDT. This particular hurricane has been a surprise that no one was concerned about five days ago, and it has been very difficult for forecasters to narrow down its future path. The 11 PM advisory has just been released, and here is where we are according to the NHC:

At 1100 PM AST (0300 UTC), the center of Hurricane Dorian was
located near latitude 23.3 North, longitude 68.4 West. Dorian is
moving toward the northwest near 12 mph (19 km/h), and this general motion is expected to continue through Friday.  A west-northwestward to westward motion is forecast to begin by Friday night and continue into the weekend.  On this track, Dorian should move over the Atlantic well east of the southeastern and central Bahamas tonight and on Friday, approach the northwestern Bahamas Saturday, and move near or over portions of the northwest Bahamas on Sunday.

Maximum sustained winds have increased to near 105 mph (165 km/h) with higher gusts.  Dorian is expected to become a major hurricane
on Friday and remain an extremely dangerous hurricane through the weekend.

What is making this hurricane so difficult to forecast is that its course will be affected by its speed. The storm is expected to turn westerly because of a high pressure ridge north of it that will keep it from going north. However, the ridge is expected to fall apart and stop influencing the storm by Tuesday, allowing it to turn north. If the storm moves quickly, it would likely cross south Florida into the Gulf of Mexico before turning north. However, if the storm moves more slowly, the high ridge could dissipate, allowing it to turn north while over land in Florida or even before reaching the coast of Florida.

All of this makes planning extremely difficult, and people along the coast all the way from Louisiana to North Carolina could be in the line of fire. The NHC does, however, need to draw a cone. The latest one shows that The Ford Plantation is in an area with less than a 20% chance of having tropical storm force winds. 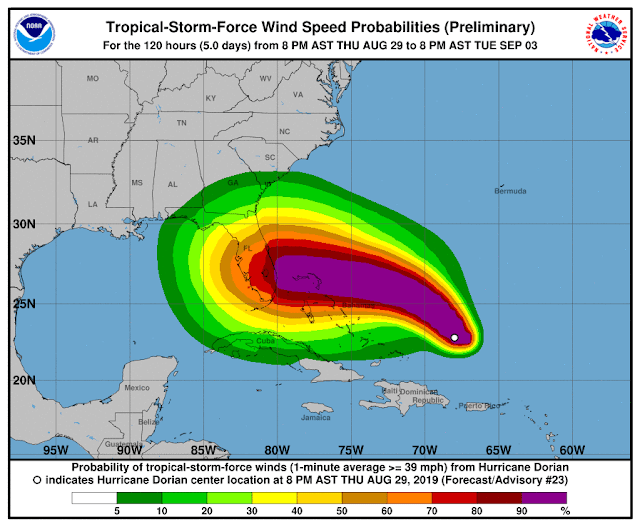 The more detailed cone showing estimated times has tropical storm force winds reaching our area, if at all, some time around 8 PM Monday. This time has changed from the 11 AM forecast, which had us at an 8 AM arrival time Monday: 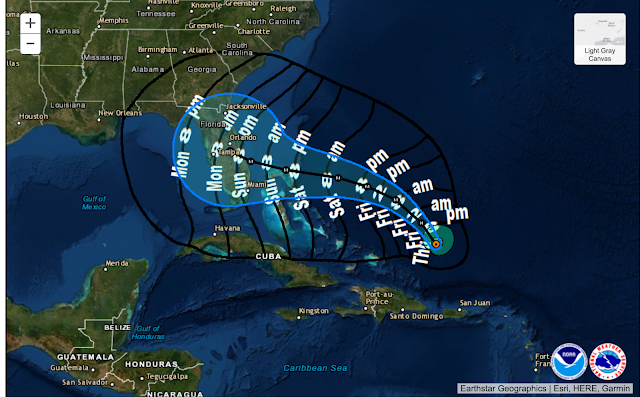 As you can see, while we are not on the forecast track, we are just barely outside the cone. Statistics show that in 2/3 of cases, hurricanes make landfall somewhere within the cone. So we are not at all out of the woods yet. However, it's even possible for the storm to really slow down over the weekend and then make a sharp turn north, missing land altogether. Let's hope that's the case. This will come ashore as a Category 3 or 4 hurricane, that can be totally devastating.

A final note on surge. We learned here painfully two years ago that even a tropical storm that travelled up near us from the Gulf coast can cause serious tidal surge when strong offshore winds coincide with high tides. Here, the river rose over its banks, flooding parts of our Club property. Unfortunately, with no surge at all, we are having very high tides right now on the Ogeechee River. Our normal tidal range is from a low of around sea level (0) to a high of six to seven feet. Based on Ft. Mcallister tides that occur about two hours before ours, the Monday tides here are:

So we enter Labor Day weekend on edge. Here's hoping this storm takes a more favorable turn, and that our winds and tides don't conspire against us as they did in 2017.

We understand well these days of worry and uncertainty. Crossing our fingers up in Michigan for Dorian to blow back out to sea.

Did I happen to leave a box with a two or three hundred foot unused rope onboard? If so I need it back tonight.

Thanks for the good wishes. Enjoying your trip on the blog.