I have tried to avoid discussing boat maintenance, as it is both endless and boring. I will mention a little of it at the end of this post. But improvements to the boat are exciting and fun, at least to me. So here is what has been going on over the last few weeks.

The electronics on this 14-year-old boat were dated when I bought her, but for budgetary reasons I decided to live with what I had for as long as possible. Much as I would love to take out most everything and put in two giant multi-function displays to give me a "glass cockpit", the old Raymarine radar works fine for my purposes. On the other hand, the two Furuno chart plotters (pilothouse and flying bridge) have given me trouble from the start. They often turn off for no reason and take several minutes to reboot. This has happened more than once while navigating a tricky passage. I have had backup apps on my iPad, but I'm now having both units replaced with Garmin plotters. While the new ones fit roughly into the same openings, the screens are much larger, mostly because they are touch screens and no room is taken up by buttons.


I realize it doesn't look like it from the photo above, but the work is almost done. The boat was hauled out of the water today to install the new depth transducer that should give me some pretty cool imagery of the ocean bottom beneath me and ahead.

The new plotters involved installing a new network that allows all of the instruments to talk to one another, new depth and wind transducers, and various network translators that allow a few old instruments to talk to the new network. I'm also installing two new vhf radios that are an inexpensive but vital part of the electronics. Not only do I love gadgetry, but these additions will add both safety and convenience to routine travel.

I've also installed new LED light fixtures on the exterior decks. There are a total of 14 of these lights. I had been gradually replacing halogen bulbs with LED bulbs, but they didn't last as long as advertised, and many of the fixtures were corroded or broken from 14 years in the elements. The new lights are slightly brighter, but still a soft light, and not as bright as they look in this photo. We can now see to get around the decks at night, and I think our curb appeal has been enhanced.

Finally, and not at all thrilling, I've had a new bow roller system installed to handle our anchor and chain. When I first bought the boat, it was agreed that the broker would order and properly install a new 154 lb. Rocna anchor. These anchors are known for good holding power and are easy to set because a large round semi-circle on top causes the anchor to roll over if it lands upside down on the bottom. The anchor was ordered but installed on the old rigging and just didn't fit right on the boat. This is my second try at correcting the situation, and involved installing a large roller assembly that hangs the anchor out over the water rather than letting it drop through an opening in the bow pulpit. You can likely see from the photo below that this gets the gigantic anchor out of the way where it can be likely work well, not scrape up the fiberglass, and be out of the way of the other anchor. We'll see how it goes, but we have had trouble with anchoring and stowing the anchor for two years, so I hope we got it right this time.

As far as maintenance, a number of items simply broke while the boat was stuck in Bimini for four months. The water maker was clogged and had an air lock in the input line, the master stateroom air conditioner didn't work at all, the pilothouse air handler sounded like a bearing was going (which has now happened), and the bottom of the boat grew layers of grass that was pretty shocking to see when hauled out today. 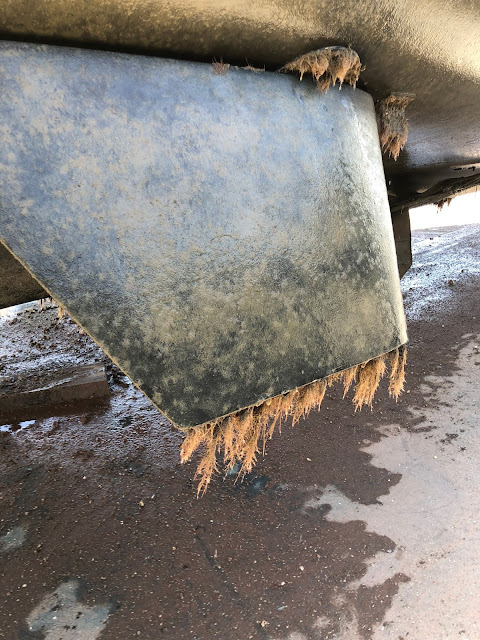 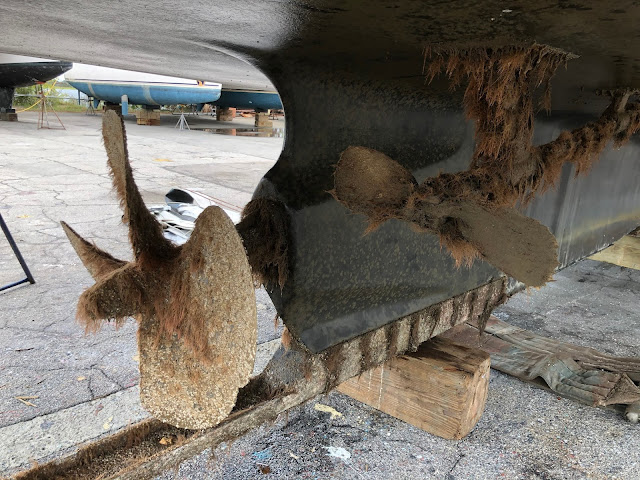 The sealer around the new transducer tube will cure overnight, and we will have the remainder of the bottom cleaned and some new zincs added before putting her back in the water tomorrow. Most of the remaining work should be completed this week if the new air handler arrives. So we are near the end and getting ready to play again on the boat.

Eager to hear how the new roller works out. We constantly fight with ours.