A few weeks ago, I went to check on my boat at the Hinckley Marine boatyard in Thunderbolt, just east of Savannah. When I arrived, the entry road to the yard was under water. All of the employee cars were parked along the road a few hundred yards from the entrance, and one employee was directing traffic. He told me the tide had gone down already and that I could probably get through and find a dry parking spot, but getting to the dock and my boat might be a challenge. He also recommended a quick car wash that afternoon to get the salt off.

I tentatively made my way in and found all of the employees wearing tall rubber boots and sloshing around the soaked boatyard. I did manage to park in a dry spot and made my way along a narrow wall to get to the docks. While we all know that sea levels are rising, the experience led me to some reading on the subject. This is not a discussion of the causes of climate change, nor is it political. I simply wanted to find out what is happening right here where I live.

There are tremendous tides in our area, and on the day of this experience, they were much higher than average. In Thunderbolt, the high tide that day, February 20, was 9.8 feet while the low tide was -2.1 feet, a big day to be sure. But the measurement of tides is in relation to mean sea level, a number that is constantly rising. The tide gauge at Fort Pulaski is the only official measurement in the state. It was commissioned in 1935 and, since that time, the sea level has risen more than nine inches, a rate of more than a foot every hundred years. And the rate of rise is increasing. The low projections show a sea level rise of two feet by the end of this century while the most extreme show a rise of more than 10 feet in the same period. Almost all of the increase is attributable to the water rising rather than land sinking. 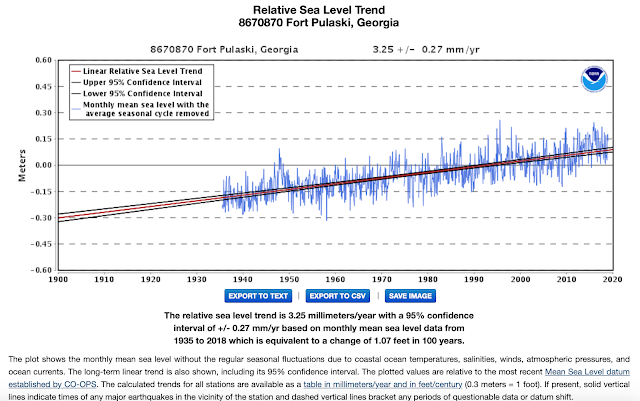 Someone asked me recently why the sea level would rise when glaciers melt that are already in the sea. It doesn't. Sea level rise is caused by runoff from the melting of glaciers that are on land, and by the expansion of sea water as its temperature increases. There are conflicting estimates of how much is caused by each of these factors, but there seems to be a developing consensus that thermal expansion of sea water will play the larger role long term.

Around here, there are signs everywhere of the issues that sea level increase is already causing. More and more frequently, U.S. Highway 80 to Tybee Island has to be closed as it is under water. Low areas along the Thunderbolt area are also routinely disrupted. A portion of President Street in Savannah is being elevated five to eight feet to prevent flooding.

Projecting the exact time that any area of the country succumbs to what is called "chronic inundation" is extremely difficult, as it involves estimating how trends change in the future. But we do know now that Savannah, along with Miami and New Orleans are high on the list of cities that will be affected the most quickly. For a more detailed study by the Union of Concerned Scientists pointing this out, see "When Rising Seas Hit Home". An interesting exercise is an interactive map published online by NOAA where you can zoom into an area of interest and slide the sea level up as much as 10 feet above its current level. For our area of the world, it looks pretty scary even to see the effect of a one or two foot rise.

Work has progressed slowly on the few projects for the boat. I hope to have it out of the boatyard this week or next.